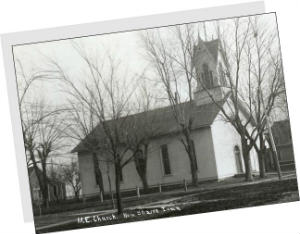 The beginning of the New Sharon church was a Methodist Class comprised of 10 adults and several children, organized by the pastor of the Peoria circuit, a Rev. J. Welch, in the fall of 1862. In the year 1863, this class was organized into a church and was attached to the Peoria circuit, with Rev. P.H. Early as pastor, and Dr. Warren as local preacher.

From this time until the first church was built in 1871 and 1872, services were held in a blacksmith shop, store building, private homes, and after a schoolhouse was built, in the schoolhouse itself.

At the Iowa Conference in September, 1869, the New Sharon Church was established as a separate charge and the first pastor assigned was Rev. T.J. Meyers.

In 1870, the first parsonage was built on the northwest corner of the block acquired in 1868. The original church building was built and completed in 1872 and dedicated in 1876, at a cost of $4,600. The church seats at that time were 2x12 rough pine boards supported by blocks of wood. Heat was furnished by three coal stoves and twenty coal oil lamps swinging in the chandeliers for lighting.

In 1910, under the pastorate of G.H. Hanawalt, plans were made for a new church home 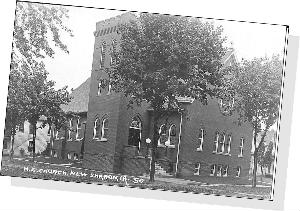 to be built at the present location of Market and Pearle Streets. These plans culminated in a new church building dedicated on December 17, 1911. The same bell used in the first church still stands to this day to call people to worship. The cost of this church building, including the two lots and the parsonage, was approximately $15,000. In 1921 a new parsonage was erected at a cost of $6,000.  Numerous additions and renovations have been made throughout the years, including the addition of an educational annex, a street level entry area, and an elevator in 1992 connecting the sanctuary with the lower level.  Recent improvements to the sanctuary and entry level were made since October, 2011.

On a Sunday noon in March, 1937, shortly after the morning service, disaster struck when a fire broke out and the church roof was burned down to the walls, except at the north end where the Hammond memorial window was spared. Insurance covered the loss and on June 30, 1937, the rebuilt sanctuary was dedicated under the pastorate of E.L. Bellows.

In 1995, the church was blessed with the addition of the McVay building on the northwest 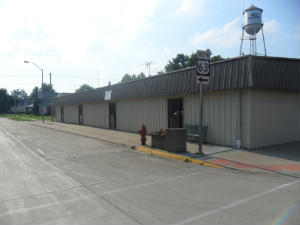 corner in the center of town. The church office was moved from the basement of the church to the newly named McVay Family Center, making the pastor, office personnel and facilities more accessible to the public. The McVay Family Center has become the hub of many  activities, both for the church and the community of New Sharon. Sunday school classes and most of the church’s youth ministries meet there. It is also used for receptions, family gatherings, funeral luncheons, community 4-H and Boy Scouts/Girl 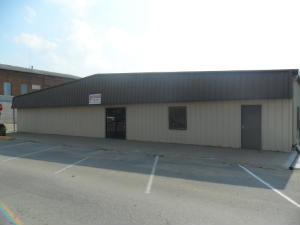 Scouts, Spring festival activities, and other activities. An ecumenical food pantry called CARE (we Care About Reaching Everyone in need) is located at the McVay.  A recent addition is the opening of a fitness center called Vital Fitness Center, that is open to all members of the New Sharon community.  In 2002, a new parsonage was built located at 202 North  Monroe Street. 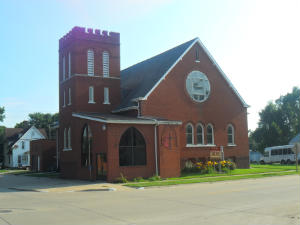 From the humble beginning of the Methodist Church in 1862 with only a few families, New Sharon United Methodist Church has grown to a membership of nearly 600 people, with two worship services on Sunday and mid-week ministries for children and youth that  include upwards of  over 300 people in worship each week on Sunday mornings and Wednesday evenings. Hitherto hath the Lord blessed us! We give Him praise! 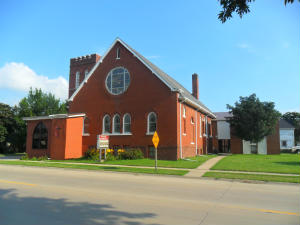